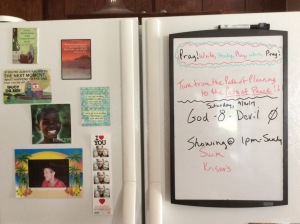 So the last few months have been pretty rough in many ways. I spent hundreds of hours helping a phenomenal Denver dog trainer (I’ll use a fictitious name of “Susanna”) figure out why her bills were not getting paid by her bookkeeper. I did not charge her anything because it was the right thing for me to do.

I even loaned her money so she wouldn’t be evicted on August 14th. Two weeks later I realized that she was also taking thousands of dollars from her business for personal expenses and I confronted her. She quickly took all the cash out of the accounts, closed them both and closed off my access to the accounts. Talk about looking guilty of something!

Yesterday the detective in charge of the case called me and said that the illustrious dog trainer “Susanna” doesn’t want to press charges against the woman that stole $40,000-$60,000 from her and that she had no idea what I had been working on. What? A million calls and emails and she didn’t know anything about this theft??

He had told me a month ago that with the evidence that I had provided to him, the bookkeeper would go to jail for a long time. He said it looked extremely suspicious that an owner of a business would not want to pursue a locked-up, for-sure case, but what could he do if she refused? The claim had to come from the victim herself, not me. The victim didn’t want anyone uncovering the real truth.

I had even found an attorney that would file a civil suit as well, the court would then order that the bookkeepers house be sold and the proceeds would go back to “Susanna.” Such a fairy tail ending, right?
Nope. I get a call from a policeman on Thursday night on my way to a church fundraising dinner. This “cop” threatens me with a criminal charge of harassment if I don’t leave “Susanna” alone. I had stopped by to talk with her on the way to my dinner, but she was not there so I left a note asking for my money back. I also told her to be honest with the guest speaker that was coming in from Spain to work at her Lakewood training facility for five days. She has a history of keeping the registration fees and not paying her speakers and has quite a long list of unhappy speakers and participants per the reviews on her social media accounts.

The really crazy thing was that I had also spent a lot of hours talking with her husband, trying to encourage him to hang in there and support “Susanna.” I am going through a divorce right now so I know how important a supportive husband is. I prepared numerous meals at my house in August to help them out during their financial crisis. The last week that I worked with them, he and their daughter came over and were ready to throw in the towel because “Susanna” had become so irrational and difficult to live with, even yelling and screaming at their daughter. This has happened numerous times during their marriage according to her husband.

What really made my week? A registered three page letter yesterday from her attorney accusing me of slander. Gee, didn’t I just write a long story about how “Susanna” had been victimized by her bookkeeper? Read “A Tarnished Reputation” that I write on August 20, just four weeks ago.

Didn’t I loan her money, keep her from being evicted? Buy her daughter a $120 graphing calculator and other items because “Susanna” couldn’t afford them? But yet she can afford an attorney to file false claims against me and lie to the police detective. Seems to me that’s two felonies against Susanna, not against me.
So I felt pretty beat up and victimized myself by last night. At a different point in my life, I would have been down and out and asking myself why I had helped this lying, cheating and heartless person. But I knew why I had helped her. I really loved her daughter and felt so sorry for her faithful and loving husband who she called “one of her hourlies” the very first time I met with her.

I woke up this morning and made a list of things I needed to do today. Every time I accomplished something, I wrote the score on my refrigerator white board. I’ve decided that it’s easy to slip into kind of a coma and forget how many wonderful things we are blessed with every single day. We let our problems overshadow the amazing things that fall right into our laps.

As of noon today, my scoreboard showed that God was ahead by “8” and the Devil had “0.” I will not “Susanna’s” evil and wicked ways keep me down. I am ready for the next round with her and God will help me prevail because it’s the right thing to do.

The score has grown to 11-0 this afternoon and the day isn’t over.

Life is good. God is good.