You know who I am talking about.  The world is filled with people that hate other people if they have different beliefs about religion, sexual orientation or politics. The political circus that we all will be forced to watch for the next 14 months, even if we don’t want to buy a ticket for admission, is a perfect example of this.  Politicians with lots of resources to support them, spew pure hatred about immigrants, women’s rights and anything else that will grab the media’s attention.  The sad thing is that the guy with the loudest ugly mouth has the lead in the polls right now.  Why? Because most of us are so sick of what has been happening in Washington, that everyone is ready for a change and even a loud mouth wannabe is better than many of the politicians in office right now.

Remember back in 2008 when everyone wanted a change?  The country did get the change they voted for.  But without the congress working together with any president, whether Republican, Democrat, male, female, black or white, nothing will ever really change in our political world.  This is no different than the controversial issues that have been voted on by the Supreme Court.  The year I graduated from high school, the Roe vs Wade decision was handed down by the court.  42 years later and people still want to overturn the decision.  Their personal opinions are more important than the decisions from the highest court in our nation.

Those “people” are usually hypocritical male politicians with little regard to how woman feel about the subject and their rights to make painful decisions regarding their lives and those of their family.  The same type of controversial decision came down this summer regarding same sex marriages.  Churches are struggling with how to accept this decision since this is considered a sin in the Bible by many theologians.  But church leaders recognize that all of us are sinners whether through greed, being materialistic, having affairs, drinking too much, judging other people, gossiping, eating too much, or stealing at the office by spending personal time on Facebook or texting rather than doing our jobs.  How can church leaders condemn only one type of sin without condemning all of the rest of our sins?  Christians know that by believing in Jesus Christ, our sins are forgiven.  We do not need to worry about the judgement by politicians or individuals, only God’s judgement of our beliefs and how we have led our lives of being kind and helpful to others.

Kim Davis became the poster child of “brave Christians standing up for their personal beliefs” regarding same sex marriages and the sanctity of marriage.  I am a Christian and believe that most Christians do not support her not doing her job.  She is an example of someone who is judgmental and hypocritical, herself being married 4 times.  It is amazing to me that she felt no remorse in throwing stones at these couples wanting to pay for a license that was now their legal right to obtain while she herself was not free of her sin against the sanctity of marriage.  And yet what I am I doing right now?  Judging Kim in a similar manner.  We all judge people if we don’t agree with them. 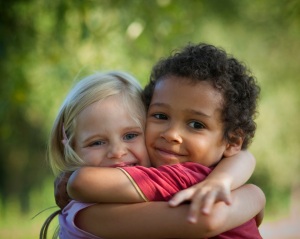 We start out as young children, loving everyone and not caring what color skin they have, whether they are a girl or boy,  what country they are from or what church they go to.  Then the prejudices of our families start melting through that innocent, childlike shield and we start forming opinions that often stay with us the rest of our lives.  We become judgemental and decide that our opinions are the only valid ones and that anyone who doesn’t agree, is a bad person.

I grew up during a time of complete opposition to everything in our country.  The Vietnam War was going on, there were protests on every campus in the country and when the tragic events at Kent State happened, the National Guard moved into town, taking over the auditorium at our school.  Then Roe vs Wade came along, tearing the nation in two.  And one day I saw two young guys walking down the street holding hands and kissing and I just stood there in amazement.

I attended a very small Southern Baptist church and felt safe and secure with my church community.  I was part of the youth choir group that toured around the area, bringing our love of The Lord and our music to others. I heard judgemental comments from some of the woman at church about what people were wearing or the “unnatural” color of their hair, but I ignored it.  Then I was judged because of my poor little boy that was born mentally retarded and I turned away from that church. My heart was broken and I allowed the words of one woman to drive me away from the church I loved and needed in my life.

Don’t allow the rhetoric of someone like Kim Davis, wealthy politicians or even hypocritical Christians determine your views on people’s rights and personal decisions.  We need to stop judging others of their choices in life and look deep into our own lives, striving to be kinder and more accepting of people.  God wants us to live our lives so that others can see and understand the joy of being a loving Christian, not a judgemental one.  We need to love people, accept their differences and allow them to be happy with their life choices.

It is not up to us to judge others, only love them.